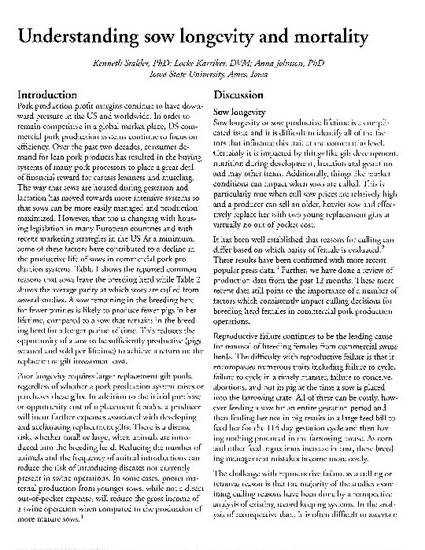 Pork production profit margins continue to have downward pressure in the US and worldwide. In order to remain competitive in a global market place, US commercial pork production systems continue to focus on efficiency. Over the past two decades, consumer demand for lean pork products has resulted in the buying systems of many pork processors to place a great deal of financial reward for carcass leanness and muscling. The way that sows are housed during gestation and lactation has moved towards more intensive systems so that sows can be more easily managed and production maximized. However, that too is changing with housing legislation in many European countries and with recent marketing strategies in the US At a minimum, some of these factors have contributed to a decline in the productive life of sows in commercial pork production systems. Table 1 shows the reported common reasons that sows leave the breeding herd while Table 2 shows the average parity at which sows are culled from several studies. A sow remaining in the breeding herd for fewer parities is likely to produce fewer pigs in her lifetime, compared to a sow that remains in the breeding herd for a longer period of time. This reduces the opportunity of a sow to be sufficiently productive (pigs weaned and sold per lifetime) to achieve a return on the replacement gilt investment cost.