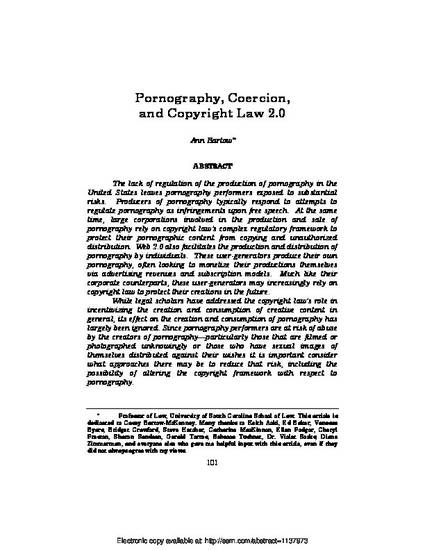 The lack of regulation of the production of pornography in the United States leaves pornography performers exposed to substantial risks. Producers of pornography typically respond to attempts to regulate pornography as infringements upon free speech. At the same time, large corporations involved in the production and sale of pornography rely on copyright law's complex regulatory framework to protect their pornographic content from copying and unauthorized distribution. Web 2.0 also facilitates the production and distribution of pornography by individuals. These user-generators produce their own pornography, often looking to monetize their productions themselves via advertising revenues and subscription models. Much like their corporate counterparts, these user-generators may increasingly rely on copyright law to protect their creations in the future. While legal scholars have addressed the copyright law's role in incentivizing the creation and consumption of creative content in general, its effect on the creation and consumption of pornography has largely been ignored. Since pornography performers are at risk of abuse by the creators of pornography, particularly those that are filmed or photographed unknowingly or those who have sexual images of themselves distributed against their wishes, it is important consider what approaches there may be to reduce that risk, including the possibility of altering the copyright framework with respect to pornography. Copyright laws do not provide ownership interests or control mechanisms to the subjects of pornographic material, and instead permits the creators to benefit at the expense of the subjects when their participation has not been consensual. Providing this type of control - namely by requiring the creator to show that the subjects' participation was voluntary as a condition of providing copyright protection - would help reduce the risks faced by pornography performers. Promulgating a moral approach to structuring copyright protections is already one goal that is animating calls for reform of the current system. Copyright law should link the ability to register and enforce copyrights on pornographic works to the creators' compliance with a regulatory scheme designed to promote the safety and well-being of pornographic performers by confirming their consent.