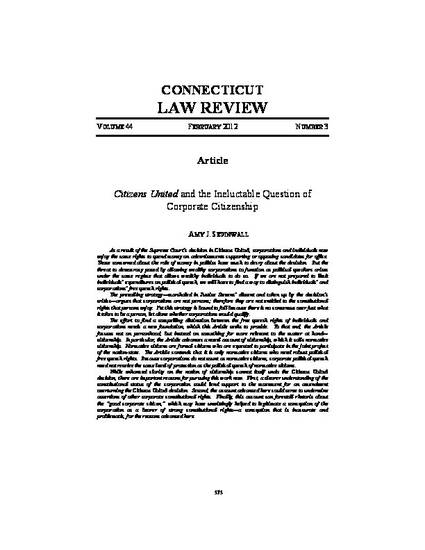 As a result of the Supreme Court’s decision in Citizens United, corporations and individuals now enjoy the same rights to spend money on ads supporting or opposing candidates for office. Those concerned about the role of money in politics have much to decry about the decision. But the threat to democracy posed by allowing wealthy corporations to function as political speakers arises as well under a regime that allows wealthy individuals to do so. If we are not prepared to limit individuals’ expenditures on political speech, we will have to find a way to distinguish individuals’ and corporations’ free speech rights.

The prevailing strategy – marshaled in Justice Stevens’ defense and taken up by the decision’s critics – argues that corporations are not persons, and so they are not entitled to the constitutional rights that persons enjoy. Yet this strategy is bound to fail because there is no consensus over just what it takes to be a person, let alone whether corporations would qualify.

While enhanced clarity on the notion of citizenship cannot itself undo the Citizens United decision, there are important reasons for pursuing this work now. First, a clearer understanding of the corporation’s constitutional status could lend support to the movement for an amendment overturning the Citizens United decision. Second, the account advanced here could serve to undermine assertions of other corporate constitutional rights. Finally, that account can forestall rhetoric about the “good corporate citizen,” which may have unwittingly helped to legitimate a conception of the corporation as a bearer of strong constitutional rights – a conception that is inaccurate and problematic, for the reasons advanced here.