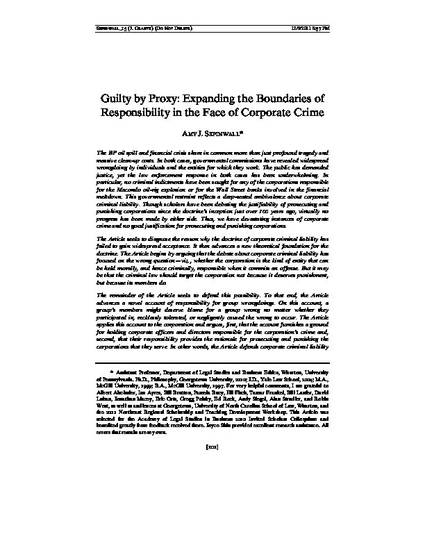 Article
Guilty by Proxy: Expanding the Boundaries of Responsibility in the Face of Corporate Crime
Hastings Law Journal (2011)
Download Find in your library
Abstract

The BP oil spill and financial crisis share in common more than just profound tragedy and massive clean-up costs. In both cases, governmental commissions have revealed widespread wrongdoing by individuals and the entities for which they work. The public has demanded justice, yet the law enforcement response in both cases has been underwhelming. In particular, no criminal indictments have been sought for any of the corporations responsible for the Macondo oil rig explosion or the Wall Street banks involved in the financial meltdown.

This governmental restraint reflects a deep-seated ambivalence about corporate criminal liability. Though scholars have been debating the justifiability of prosecuting and punishing corporations since the doctrine’s inception just over 100 years ago, virtually no progress has been made by either side. Thus, we have devastating instances of corporate crime and no good justification for prosecuting and punishing corporations.

This Article seeks to diagnose the reason for which the doctrine of corporate criminal liability has failed to gain widespread acceptance. It then advances a new theoretical foundation for the doctrine.

The Article begins by arguing that the debate about corporate criminal liability has focused on the wrong question – viz. a question about whether the corporation is the kind of entity that can be held morally, and hence criminally, responsible where it commits an offense. But it may be that the criminal law should target the corporation not because it deserves punishment, but because its members do.