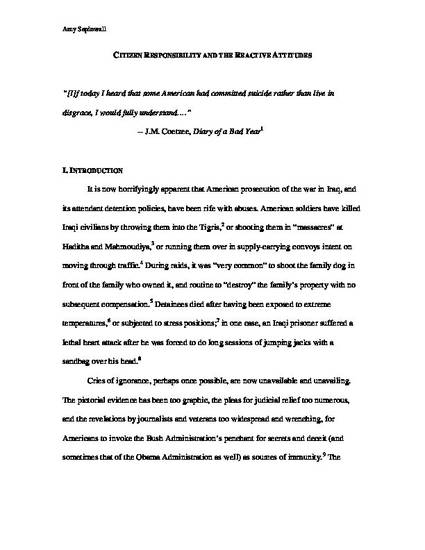 Moreover, the kind of responsibility I have in mind is not simply the forward-looking variety, which is what many forms of civil liability and reparations programs contemplate; nor is it simply outcome responsibility, which arises where an individual deserves to incur the material consequences of her acts, but not moral sanction. Instead, I argue that U.S. citizens are legitimate targets of blame for abuses committed in the course of the war in Iraq.

The account of citizen responsibility that I advance differs from an individualist account insofar as it severs moral and causal responsibility: Again, I argue that the citizen may bear moral responsibility even though she did not participate in, facilitate, or even tolerate the abuses committed in her midst. The account also severs the notions of guilt and blameworthiness: I argue that the citizen may be an appropriate object of blame (and hence appropriately subject to resentment and indignation) even though she need not conceive of herself as guilty. And I shall suggest that this fracturing of the traditional troika of guilt, resentment, and indignation has implications for the way we think about moral responsibility more generally.

I begin by articulating an account of the relationship between the citizen and her nation-state that grounds the citizen’s responsibility for a transgression of her nation-state independent of the extent of her participation in that transgression. I do not anticipate, however, that that account will induce guilt in every American who encounters it. The resistance to guilt is itself interesting and, in the second section of the paper, I seek to investigate its source. To that end, I undertake an exploration of the moral psychology of guilt and resentment, especially as these emotions pertain to understandings of responsibility for war crimes among members of the perpetrator and victim populations. I end by gesturing to the ways in which the account challenges accepted truths about moral responsibility and its relationship to the reactive attitudes.