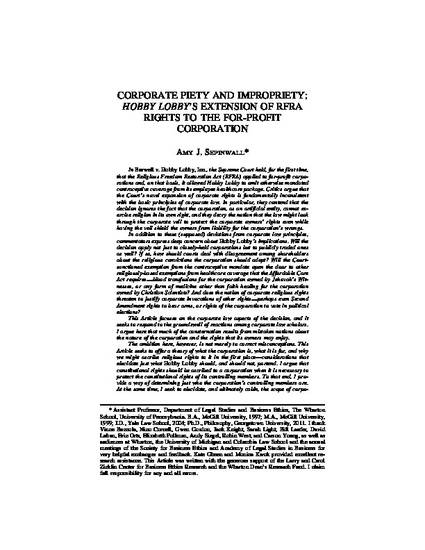 In Burwell v. Hobby Lobby, the Supreme Court held, for the first time, that the Religious Freedom Restoration Act (RFRA) applied to for-profit corporations and, on that basis, it allowed Hobby Lobby to omit otherwise mandated contraceptive coverage from its employee healthcare package. Critics argue that the Court’s novel expansion of corporate rights is fundamentally inconsistent with the basic principles of corporate law. In particular, they contend that the decision ignores the fact that the corporation, as an artificial entity, cannot exercise religion in its own right, and they decry the notion that the law might look through the corporate veil to protect the corporate owners’ rights even while having the veil shield the owners from liability for the corporation’s wrongs.

In addition to these (supposed) deviations from corporate law principles, commentators express deep concern about Hobby Lobby’s implications. Will the decision apply not just to closely-held corporations but to publicly traded ones as well? If so, how should courts deal with disagreement among shareholders about the religious convictions the corporation should adopt? Will the Court-sanctioned exemption from the contraceptive mandate open the door to other religiously-based exemptions from healthcare coverage that the Affordable Care Act requires -- blood transfusions for the corporation owned by Jehovah’s Witnesses, or any form of medicine other than faith healing for the corporation owned by Christian Scientists? And does the notion of corporate religious rights threaten to justify corporate invocations of other rights – perhaps even Second Amendment rights to bear arms, or rights of the corporation to vote in political elections?

This Article focuses on the corporate law aspects of the decision, and it seeks to respond to the groundswell of reactions among corporate law scholars. I argue here that much of the consternation results from mistaken notions about the nature of the corporation and the rights that its owners may enjoy.

The ambition here, however, is not merely to correct misconceptions. This Article seeks to offer a theory of what the corporation is, what it is for, and why we might ascribe religious rights to it in the first place – considerations that elucidate just what Hobby Lobby should, and should not, portend. In this way, the Article’s theoretical contributions aim to forestall the parade of horribles that Hobby Lobby otherwise threatens to unleash.