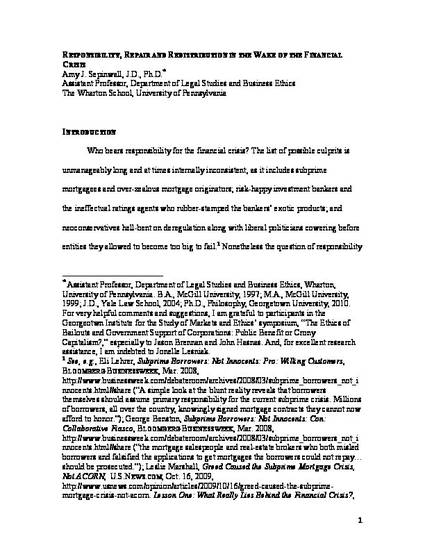 Article
Responsibility, Repair and Redistribution in the Wake of the Financial Crisis
Georgetown Journal of Law and Public Policy (2013)
Download Find in your library
Abstract

The point of departure for this paper is a claim about widespread shared responsibility for the financial crisis and the bailout it necessitated. We are inclined to decry Wall Street’s villainy, all the while conveniently overlooking our own role in precipitating the crisis. But individuals, we now know, prefer to spend rather than save and, as a result, require the kind of financial alchemy that can transform one’s house into a virtual ATM, or one’s exceedingly modest savings into a fiscal cushion that can sustain a long, comfortable retirement. Risk, then, is the inevitable price of our preferences for leisure over toil and consumption over savings. These are not, in and of themselves, morally problematic preferences. But they do foreclose an overly censorious critique of Wall Street risk-taking.

Thus, the paper begins by arguing that the responsibility of individual I-bankers, hedge fund operators, mortgage originators, and so on, need not and does not occlude the responsibility that the investing public bears. To demand that we defray the cost of Wall Street’s calamitous excesses is consonant with our role in producing them.

At the same time – and this is the claim that I seek to defend in the second half of the paper – the charge that it is unfair to have Main Street bail out Wall Street does contain a kernel of truth. The financial crisis unfolded against, and further exacerbated, unjustifiable disparities in income and wealth. The crisis, and especially the bailout, provide an opportunity to address these. And, in the course of doing so, I explore the interplay between corrective justice (here, the responsibility the public bears to clean up the mess it helped to create) and distributive justice (i.e., the obligation to reduce wealth inequalities independent of their source).