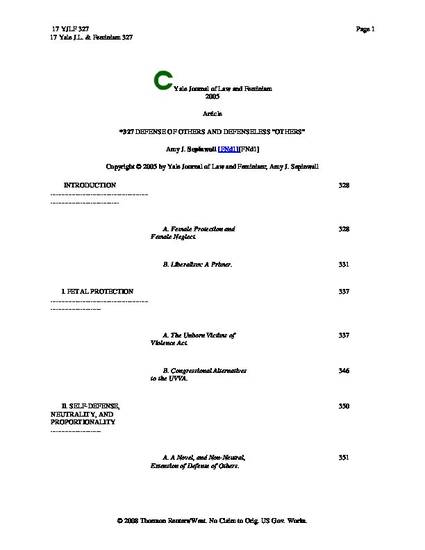 Recent efforts at fetal protection transgress the nation's most fundamental political commitments. These efforts notably include the enactment of the Unborn Victims of Violence Act (UVVA) in 2004 and, in 2002, a doctrinal development that presaged the potentially illiberal effects of the UVVA when a Michigan court recognized a woman's right to use deadly force to protect her fetus even as it denied her right to self-defense. This Article adopts a theory of political liberalism that can be traced from the Founders to contemporary political theorists, and argues that the UVVA, as well as the extension of defense of others to the fetus, violate that theory's commitments to neutrality and equality and, in so doing, privilege fetuses over their mothers, pregnant women over non-pregnant women, and batterers over their victims. The Article advocates strategies for protecting pregnant and non-pregnant women alike that remain neutral with respect to the status of the fetus, honor the loss that a woman may experience in the wake of her fetus's death, and empower women to vindicate the worth of their lives.