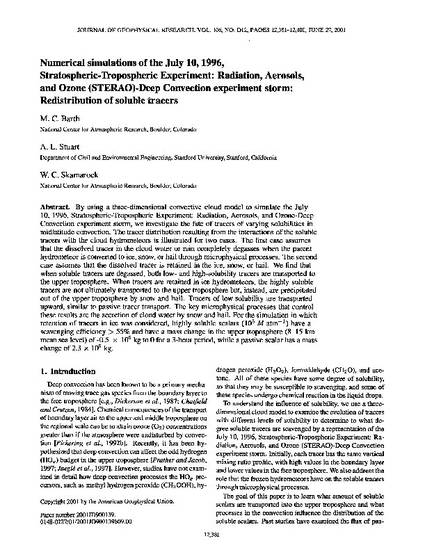 By using a three‐dimensional convective cloud model to simulate the July 10, 1996, Stratospheric‐Tropospheric Experiment: Radiation, Aerosols, and Ozone‐Deep Convection experiment storm, we investigate the fate of tracers of varying solubilities in midlatitude convection. The tracer distribution resulting from the interactions of the soluble tracers with the cloud hydrometeors is illustrated for two cases. The first case assumes that the dissolved tracer in the cloud water or rain completely degasses when the parent hydrometeor is converted to ice, snow, or hail through microphysical processes. The second case assumes that the dissolved tracer is retained in the ice, snow, or hail. We find that when soluble tracers are degassed, both low‐ and high‐solubility tracers are transported to the upper troposphere. When tracers are retained in ice hydrometeors, the highly soluble tracers are not ultimately transported to the upper troposphere but, instead, are precipitated out of the upper troposphere by snow and hail. Tracers of low solubility are transported upward, similar to passive tracer transport. The key microphysical processes that control these results are the accretion of cloud water by snow and hail. For the simulation in which retention of tracers in ice was considered, highly soluble scalars (105 M atm−1) have a scavenging efficiency >55% and have a mass change in the upper troposphere (8–15 km mean sea level) of −0.5×105 kg to 0 for a 3‐hour period, while a passive scalar has a mass change of 2.3×105 kg.

Copyright 2001 by the American Geophysical Union.