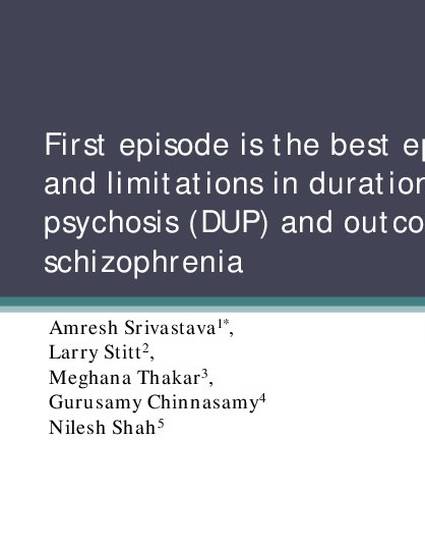 Background: Early intervention in psychosis is an opportunity. Research ahs shown that if any thing community members can do to prevent psychosis is to report early. This has opened newer vistas for understanding the complexity of brain and behaviour in schizophrenia. At the same time it has raised the bar of expectations regarding its correlation to outcome. It finally narrows down to meaningful public campaign for awareness, which will decide success of research to clinics in schizophrenia management. Duration of untreated psychosis (DUP) has emerged as a reliable predictor of outcome and provides credence to development of early intervention services. It is not quite clear if DUP works in isolation and what other factors along with DUP would determine outcome long-term outcome of schizophrenia is multifactorial in nature. The present study examines effect of DUP on outcome of schizophrenia

Results: we analyzed 101 patients available at ten years. We found that mean DUP was higher for group, which showed Clinical recovery on GCIS [14.0(SD=8.0) months for recovered & 10.8 (SD=5.7) months in nonrecovered group p=0.091]. There is a significant difference in favour of DUP≤6 months in terms of subscales of PANSS; However DUP was not found to be significantly associated with the end point parameters of good clinical or social outcome.