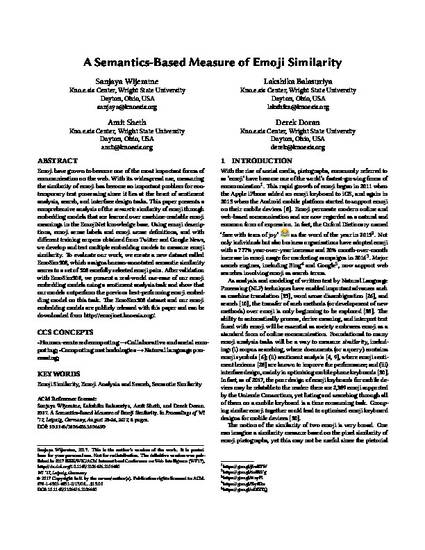 Emoji have grown to become one of the most important forms of communication on the web. With its widespread use, measuring the similarity of emoji has become an important problem for contemporary text processing since it lies at the heart of sentiment analysis, search, and interface design tasks. This paper presents a comprehensive analysis of the semantic similarity of emoji through embedding models that are learned over machine-readable emoji meanings in the EmojiNet knowledge base. Using emoji descriptions, emoji sense labels and emoji sense definitions, and with different training corpora obtained from Twitter and Google News, we develop and test multiple embedding models to measure emoji similarity. To evaluate our work, we create a new dataset called EmoSim508, which assigns human-annotated semantic similarity scores to a set of 508 carefully selected emoji pairs. After validation with EmoSim508, we present a real-world use-case of our emoji embedding models using a sentiment analysis task and show that our models outperform the previous best-performing emoji embedding model on this task. The EmoSim508 dataset and our emoji embedding models are publicly released with this paper and can be downloaded from http://emojinet.knoesis.org/.

© 2017 Copyright held by the owner/author(s). Publication rights licensed to ACM.