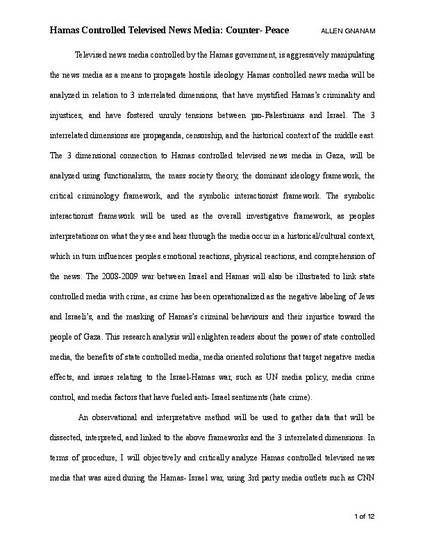 The hegemonic force of Hamas censored televised news media in Gaza, can not be fully comprehended and appreciated without recognizing the role of propaganda, censorship, and the historical context of the middle east. These 3 interrelated dimensions will be analyzed using functionalism, the mass society theory, the dominant ideology framework, the critical criminology framework, and the symbolic interactionist framework. Through censorship, Hamas news media outlets were able to unilaterally inject culturally relevant propaganda, into the minds of children and citizens. The hypodermic syringe model can be applied to the state controlled news media situation in Gaza, as the people of Gaza were constantly and consistently exposed to Hamas censored news media, due to the elimination of anti- pluralistic news media institutions by Hamas. In terms of the historical context of the middle east, much of middle eastern history has been plagued with religious and ethnic tensions (Conant, 1992), and culturally relevant propaganda flowing through censored news media outlets in Gaza, were able to reinforce and stir historical tensions. In connection to media and crime, Hamas propaganda has fueled anti- Jewish and anti- Israeli sentiments throughout the middle east, and through censorship, Hamas’s crimes have been hidden from the citizens of Gaza. It is evident that Hamas views the news media as a tool that is highly capable of instigating hatred, and advancing negative ideology. However it is also important to point out that, when the media is used justly and appropriately, it has the potential to inform individuals, raise awareness, reduce tensions, and be a problem solving tool/ resource.