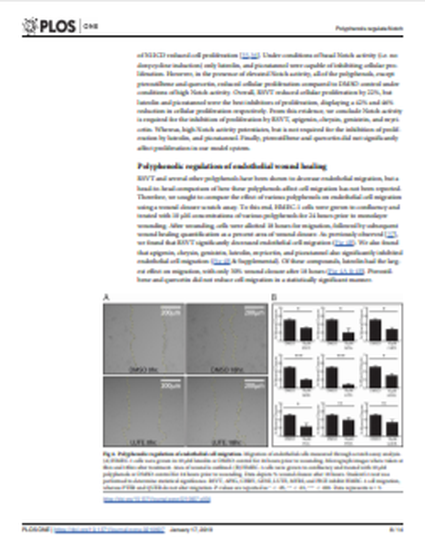 Resveratrol is a polyphenolic compound produced by plants which makes its way into the human diet through plant-based foods. It has been shown to provide many health benefits, helping to ward of age-related diseases and promoting cardiovascular health. Additionally, resveratrol is a potent activator of the Notch signaling pathway. While resveratrol receives the most attention as a polyphenolic nutraceutical, other compounds with similar structures may be more potent regulators of specific cellular processes. Here, we compare resveratrol, apigenin, chrysin, genistein, luteolin, myricetin, piceatannol, pterostilbene, and quercetin for their ability to regulate Notch signaling. In addition, we compare the ability of these polyphenolic compounds to regulate endothelial cell viability, proliferation, and migration. Out of these compounds we found that resveratrol is the best activator of Notch signaling, however, other similar compounds are also capable of stimulating Notch. We also discovered that several of these polyphenols were able to inhibit endothelial cell proliferation. Finally, we found that many of these polyphenols are potent inhibitors of endothelial migration during wound healing assays. These findings provide the first side-by-side comparison of the regulation of Notch signaling, and endothelial cell proliferation and migration, by nine polyphenolic compounds.