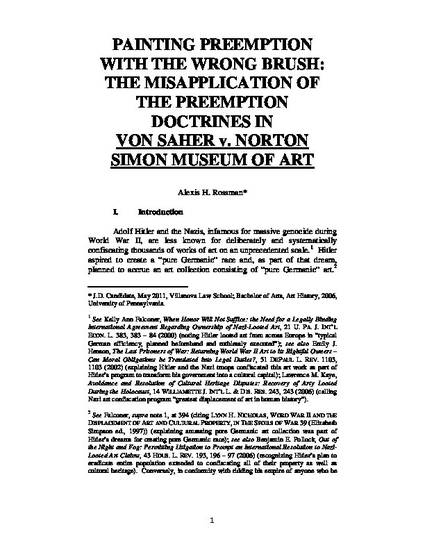 Adolf Hitler and the Nazis looted thousands of works of art throughout World War II. After the war, many pieces were not returned to the rightful owners but instead remained in public and private collections throughout the United States and abroad. California enacted California Code of Civil Procedure Section 354.3 in response to difficulties encountered by plaintiffs seeking to recover these pieces. The statute created a forum in California courts for plaintiffs to bring claims as rightful owners of Holocaust-era artwork. The Ninth Circuit recently found that this statute was preempted by the federal government’s exclusive power to conduct foreign affairs. This note argues that the Ninth Circuit was incorrect in its reasoning because it assumed that the statute addressed an issue related to the war, and therefore was preempted by the federal government’s power to conduct foreign affairs. Instead, the Ninth Circuit should not have found the statute preempted because it does not actually deal with foreign affairs and therefore does not impede on the federal government’s exclusive power to conduct foreign affairs. This note also discusses the negative implications of this holding as the ruling may have far broader implications than the court intended. Further, this holding could have significant separation of powers implications.