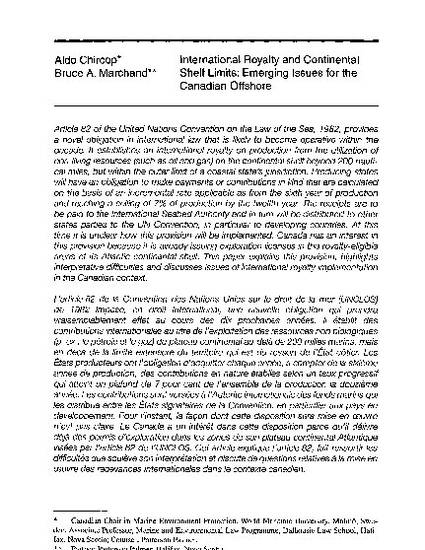 Article 82 of the United Nations Convention on the Law of the Sea, 1982, provides a novel obligation in international law that is likely to become operative within the decade. It establishes an international royalty on production from the utilization of non-living resources (such as oil and gas) on the continental shelf beyond 200 nautical miles, but within the outer limit of a coastal state's jurisdiction. Producing states will have an obligation to make payments or contributions in kind that are calculated on the basis of an incremental rate applicable as from the sixth year of production and reaching a ceiling of 7% of production by the twelfth year The receipts are to be paid to the International Seabed Authority and in turn will be distributed to other states parties to the UN Convention, in particular to developing countries. At this time it is unclear how this provision will be implemented. Canada has an interest in this provision because it is already issuing exploration licenses in the royalty-eligible areas of its Atlantic continental shelf. This paper explains this provision, highlights interpretative difficulties and discusses issues of international royalty implementation in the Canadian context.