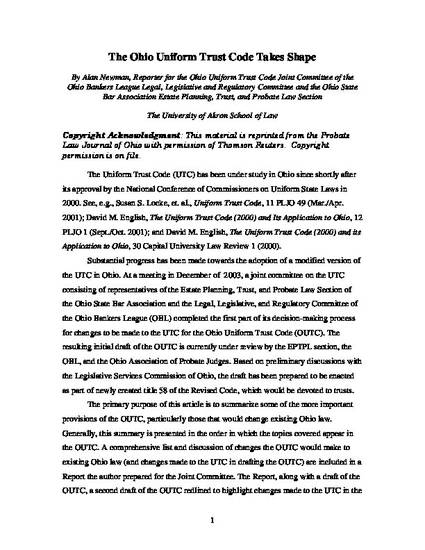 Substantial progress has been made towards the adoption of a modified version of the UTC in Ohio. At a meeting in December of 2003, a joint committee on the UTC consisting of representatives of the Estate Planning, Trust, and Probate Law Section of the Ohio State Bar Association and the Legal, Legislative, and Regulatory Committee of the Ohio Bankers League (OBL) completed the first part of its decision-making process for changes to be made to the UTC for the Ohio Uniform Trust Code (OUTC). The resulting initial draft of the OUTC is currently under review by the EPTPL section, the OBL, and the Ohio Association of Probate Judges. Based on preliminary discussions with the Legislative Services Commission of Ohio, the draft has been prepared to be enacted as part of newly created title 58 of the Revised Code, which would be devoted to trusts.

The primary purpose of this article is to summarize some of the more important provisions of the OUTC, particularly those that would change existing Ohio law. Generally, this summary is presented in the order in which the topics covered appear in the OUTC. A comprehensive list and discussion of changes the OUTC would make to existing Ohio law (and changes made to the UTC in drafting the OUTC) are included in a Report the author prepared for the Joint Committee.