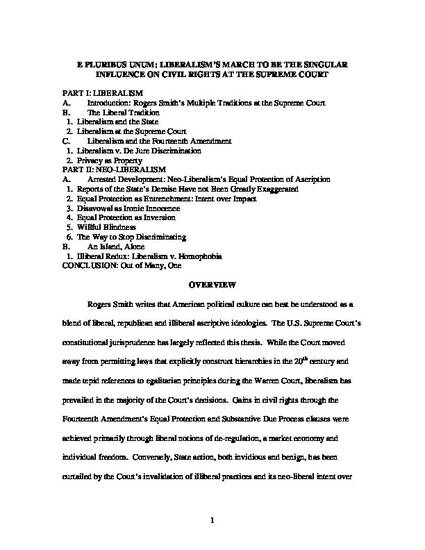 Rogers Smith writes that American political culture can best be understood as a blend of liberal, republican and illiberal ascriptive ideologies. The U.S. Supreme Court’s constitutional jurisprudence has largely reflected this thesis. While the Court moved away from permitting laws that explicitly construct hierarchies in the 20th century and made tepid references to egalitarian principles during the Warren Court, liberalism has prevailed in the majority of the Court’s decisions. Gains in civil rights through the Fourteenth Amendment’s Equal Protection and Substantive Due Process clauses were achieved primarily through liberal notions of de-regulation, a market economy and individual freedom. Conversely, State action, both invidious and benign, has been curtailed by the Court’s invalidation of illiberal practices and its neo-liberal intent over impact and color-blind doctrines that strike down remedial State programs. For explicitly constructed hierarchies such as race, the result is an illusory equal opportunity-not-equal results approach that solidifies the vestiges of past illiberal practices, converting the neo-liberalism of the present into an ascriptive ideology that preserves the hierarchies of the past. For indiscrete minorities not subject to the same comprehensive and pervasive hierarchies, a neo-liberal approach to individual freedom uncompromised by illiberal State animosities toward groups may help to serve the promise of civil rights.