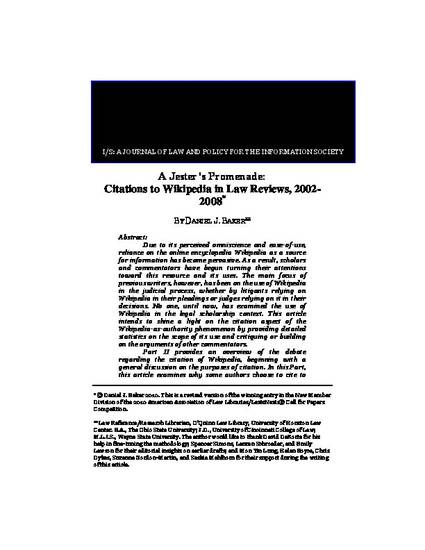 Article
A Jester's Promenade: Citations to Wikipedia in Law Reviews, 2002-2008
I/S: A Journal of Law and Policy for the Information Society (2012)
Download Find in your library
Abstract

Due to its perceived omniscience and ease-of-use, reliance on the online encyclopedia Wikipedia as a source for information has become pervasive. As a result, scholars and commentators have begun turning their attentions toward this resource and its uses. The main focus of previous writers, however, has been on the use of Wikipedia in the judicial process, whether by litigants relying on Wikipedia in their pleadings or judges relying on it in their decisions. No one, until now, has examined the use of Wikipedia in the legal scholarship context. This article intends to shine a light on the citation aspect of the Wikipedia-as-authority phenomenon by providing detailed statistics on the scope of its use and critiquing or building on the arguments of other commentators.

Part II provides an overview of the debate regarding the citation of Wikipedia, beginning with a general discussion on the purposes of citation. In this Part, this article examines why some authors choose to cite to Wikipedia and explains why such citation is nonetheless *362 problematic despite its perceived advantages. A citation analysis performed on works published by nearly 500 American law reviews between 2002 and 2008 is the focus of Part III, from a description of the methodology to an examination of the results of the analysis and any trends that may be discerned from the statistics. Finally, Part IV examines the propriety of citing to Wikipedia, culminating in a call for tighter editorial standards in law reviews.